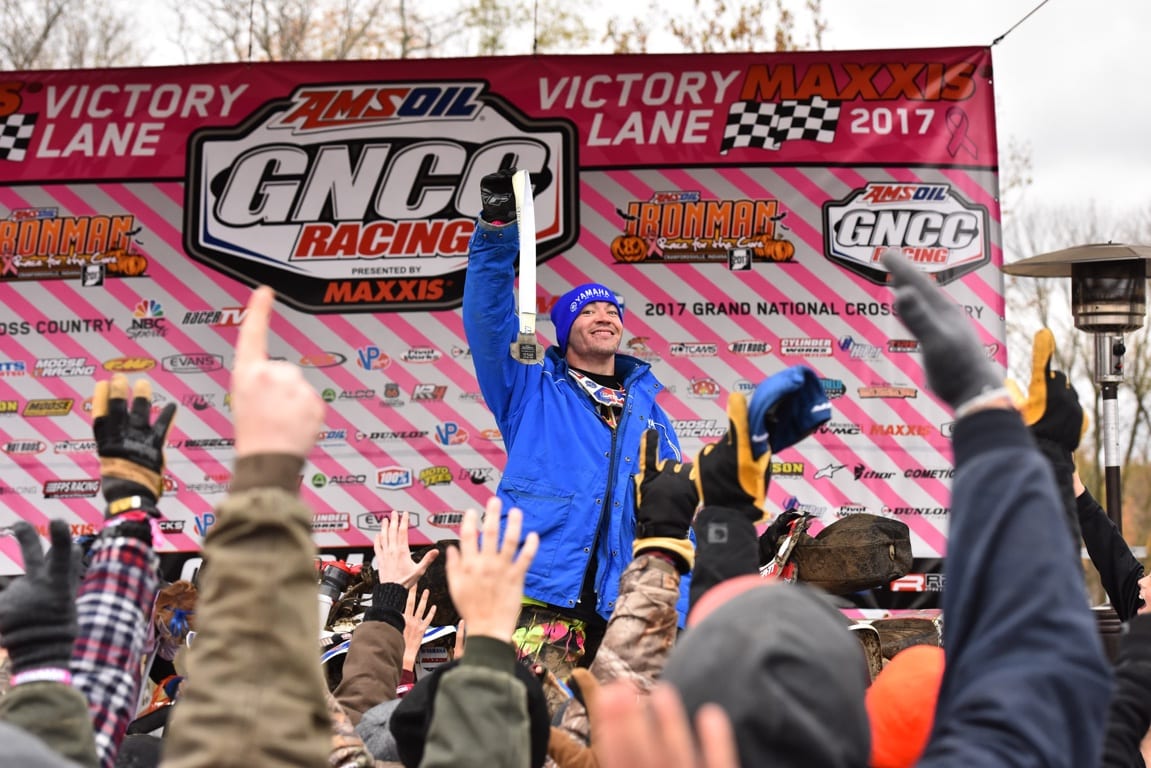 Although he solidified it over a month ago, Yamaha factory-supported racer Walker Fowler grabbed the Holeshot Award and officially clinched his third-straight XC1 Pro ATV class championship title this past weekend during the GNCC finale at Ironman Raceway in Crawfordsville, Indiana. Racing his WFR / Maxxis / Moto-XPerts / Yamaha YFZ450R, Fowler finished first in 12 of 13 rounds, setting a new record for most overall wins in a single season, and was the only racer to podium in every round. Fowler secured the Yamaha bLU cRUchampionship bonus of $12,500 and led the series with 154 more points than second place finisher and fellow YFZ450R racer, Brycen Neal.

Thanks to GBC / Fly Racing / HMF / Yamaha’s Johnny Gallagher taking his first-ever overall GNCC win in Round 6 with his YFZ450R, the best-selling 450-class Sport ATV in America* won every XC1 Pro ATV round. An additional title captured at the Ironman GNCC finale was by Traci Pickens on her YFZ450R. This win signifies her 10th WXC National Championship, tying the record for most championship wins by any GNCC racer, and further backs why Yamaha is the best-selling Sport ATV brand in America**.

In the LOORRS national circuit, the YXZ1000R finished first through fifth overall in the Production 1000 UTV class, with Brock Heger and his Icon Vehicle Dynamics / AIRAID / Yamaha YXZ1000R on top with six first place wins, earning him the $15,000 bLU cRU championship bonus. Correspondingly finishing second through fifth in the series were Brandon Arthur, Paul O’Brien, Jason Weller, and Dustin Nelson. In the LOORRS Challenge Cup race, Yamaha’s YXZ1000R again swept the podium with Mickey Thomas in first, Brock Heger in second, and Brandon Arthur in third.

Currently in LORORS Arizona, bLU cRU racer Corry Weller leads the Production 1000 UTV class in her Dragonfire Racing / Weller Racing Yamaha YXZ1000R with only two rounds remaining, and is additionally the only racer to podium in every race thus far. Fellow YXZ racers Paul O’Brien and Will Munns presently round out the top spots in second and third, respectively. Although Weller is leading the charge for the win, all three will be battling for the series championship and $7,500 bLU cRU bonus.

Bringing Team USA to their first-ever victory in the Quadcross of European Nations (QXoN) on September 23 and 24 in Cingoli, Italy, the Proven Off-Road YFZ450R finished first in all three motos. Integral to Team USA’s success, Brown secured two first-place finishes, with Wienen grabbing the holeshot and win in the second moto.

By the end of the season, Yamaha ATV and SxS racers across the country will have earned more than $60,000 in championship bonuses through the bLU cRU program. To view more information on Yamaha’s bLU cRU program, including all guidelines and requirements, visit www.YamahabLUcRU.com.

The ATV and SxS titleholders listed above, along with this year’s motorcycle champions, will be honored in November at the annual Yamaha Wall of Champions event in recognition of their exceptional racing performance. The ceremony will include a tour of Yamaha’s state-of-the-art manufacturing facility in Newnan, Ga., where all Yamaha SxS and full-size ATVs are built for worldwide distribution.

Headquartered in California since 1960, YMUS also has facilities in Wisconsin and Georgia, as well as factory operations in Tennessee and Georgia. For more information about Yamaha, visit www.YamahaMotorsports.com.