The Nomad Trunk from Kimpex Review 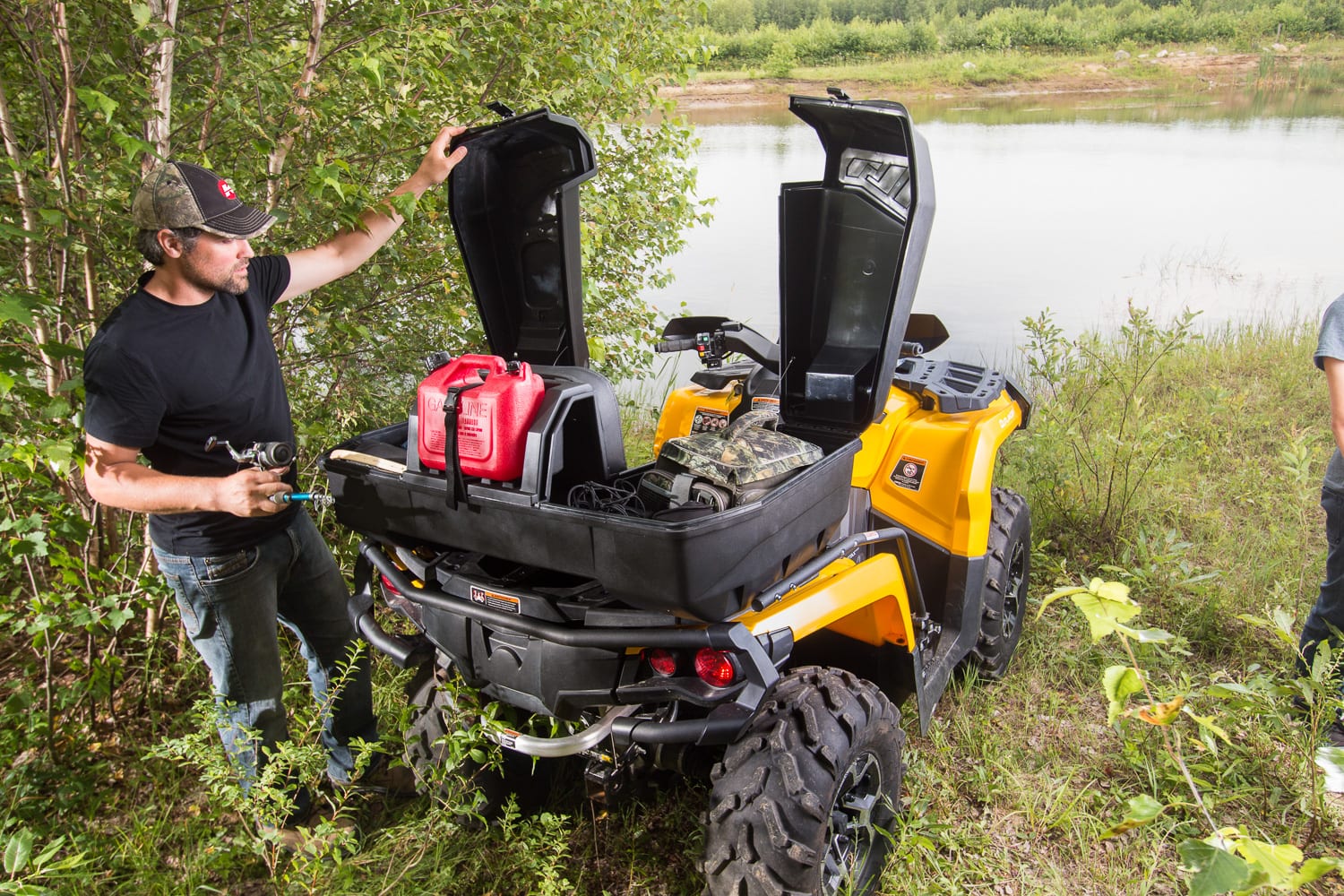 The Nomad trunk from Kimpex was launched back in August, 2017, in Boucherville, Québec. Browsing the features of this trunk, we quickly realized there was a real desire from Kimpex to create something versatile, practical and easy to use, not just a square, plastic storage box.

On delivery,I hurried to open the packing containing the Nomad trunk. I was surprised because I didn’t expect this thing to come up in so many loose parts. So I grabbed the instructions and started the assembly, which turned out to be simpler than I expected. After justa few minutes, I ha dit on the kitchen counter. The instruction sheet has plenty of pictures that made the assembly simple to do.

Let’s see what this trunk features

The trunk has a capacity of 115 liters. Despite its large capacity, the design allows it to be installed on ATVs, as well as on smaller UTVs. The best feature, in my opinion, is its versatility. It can be used for trail riding as well as for more utility uses. It is quite well thought for work, fishing and other uses.

The trunk can be partially disassembled easily to use as a toolbox, or to carry oversized items. Without any tools, simply remove a few pins and butterfly screws and adjust the trunk to fit your needs.

Kimpex has adapted the Nomad very well to the rigorous conditionsyou might find you and your ATV in. The Nomad seemed impervious to water, mud, anddust. A good quality seal has been installed to make it weatherproof.

A quick access door has been inserted into the left armrest. This is another good idea from ​​Kimpex, making it very useful for quickly accessing beverages. There is also the possibility of adding compartment separators which would help to adapt the storage capacity in the trunk. Other options are also available for the Nomad, such as heated handles that are very useful for our cold climates as well as deflectors for the hands. Our test model was the basic one. This Nomad trunk is covered by a 5-year warranty against defects in materials and workmanship.

Let’s move on to the installation

A power drill, a ¼ inch drill bit and a marker pen.

First, read the manufacturer’s notice. In general, their advice boils down to the trunk fasteners and its positioning on the vehicle. I noticed that properly positioning the trunk is often neglected but is of great importance. It is advisable not to position the trunk too far back of the ATV. Imagine a vertical line from the center of the ATV’s rear wheel.The passenger seating on the trunk’s seat shouldnot be behind this line. It should be in the center or preferably forward of this line to prevent the ATV from tipping backward. In addition, an ATVwith a rear seat too far back will end up with a light and imprecise steering action, which may lead to a lossof control of the vehicle. Finally, the trunk positioning also has an effect on the passenger comfort, as the suspension action will be felt harder if the passenger is sitting behind the axle.

Did you know that …

Laws and regulations regulate the use of trunks and seatsinstalled on single-seater ATVs.

It is beautiful trunk seat, but you probably remember the saga that took place on this subject in 2007. After many incidents involving ATV passenger seats, the authorities had started to reinforce the application of the law regarding passenger transportation on 1-seater ATV. It was very simple: There is no tolerance on this subject. The ATV world in Quebec had been very shaken and because of this, sales of trail access passes are very low. This new policy could have a big financial impact on the ATV clubs as well as on the whole Quebec ATV market. The ATV clubs, mostly held by volunteers, would inevitably suffer from this.

The actual legislation on off-road vehicles has been in force in Quebec since 1997. Two passengers on a 1-seater ATV was already part of the landscape for over 20 years, so the new policy blew the minds of many ATV enthusiasts.

Luckily, after what seemed an endless battle, Quebec’s Transport Minister Julie Boulet had made the announcement in late 2008 that there was going to be a modification on the off-road vehicle legislation to will allow the use of the passenger seat on an ATV, but under some specific conditions.

First, even if some people have excellent creative spirit, home-made seats are forbidden to carry a passenger. The use of a seat recognized by a manufacturer is mandatory.

Also, the operator of an ATV modified to transport a passenger and carrying a passenger must be at least 18 years old. He must also have in his possession a certificate of competence and knowledge to that effect, issued following training givenby the FQCQ.

The capacity of the luggage rack must be respected as well as that of the vehicle. The installation must comply with the manufacturer’s recommendations. Unless otherwise indicated, only one passenger may be transported on an ATV. A passenger in an off-road vehicle with a seat must ride behind the driver and sit facing forward with his feet resting on the footrests while the vehicle is moving.

The driver of an off-road vehicle modified in accordance with the carriage of a passenger, while carrying a passenger may only drive in the following places: a trail referred to in section 15 of the Off-Road Vehicle Act, therefore on a land of the private domain, on a state-owned land or on a public road within the meaning of the Highway Safety Code.

This is only a summary, do not hesitate to consult theAct respecting off-highway vehiclesfor more details on off-road vehicles.

We can say that we finally avoided a full passenger seat ban, but have to deal with several constraints.

Let us return to the Nomad

After installing the seat and of course making sure it is in accordance with the law, it’s now time to try it. First, I immediately noticed the choice of non-slip cushion cover that is just perfect. I have to admit that sometimesthe choice of seat cushion overlays lead to small problems. If slippery, it will unfortunatelylet the passenger slide towards the driver when the path is bumpyand forces him to reposition himself continuously. It was not the case with the Nomad. After a few kilometers ride, I am also very pleased to see that the trunk offers good rigidity despite its versatility. The quality of the plastic and the precision of the molding are certainly making the difference.

The seat’s armrests have a bend that will comfortably support the passenger’s arms. No pads nor cushion are installed, but we believe this is a long-term benefit as the pads will eventually wear and tear. Note that the handles are positioned at an angle that is well thought out. This position is more natural for the passenger and it limits fatigue. When the option is chosen, the passenger can benefit from heated handles, providing enough heat to offer a comfortable ride in any cold situation. The overall shape of the trunk remains low and allows good rearward visibility for the driver.

As for the storage, the trunk designer has provided two large storage bins, one on each side, that are large enough to contain helmets. The manufacturer has also planned a location to carry an optional 5-liter can of gas.

Finally, despite its very versatile design, Kimpex has kept it at a very attractive retail price of $ 299.99 or $ 369.99 with the heated grips. At this price, this trunk is definitely a good price-quality buy.

For more information on the Nomad Trunk, please visit : Kimpex.com