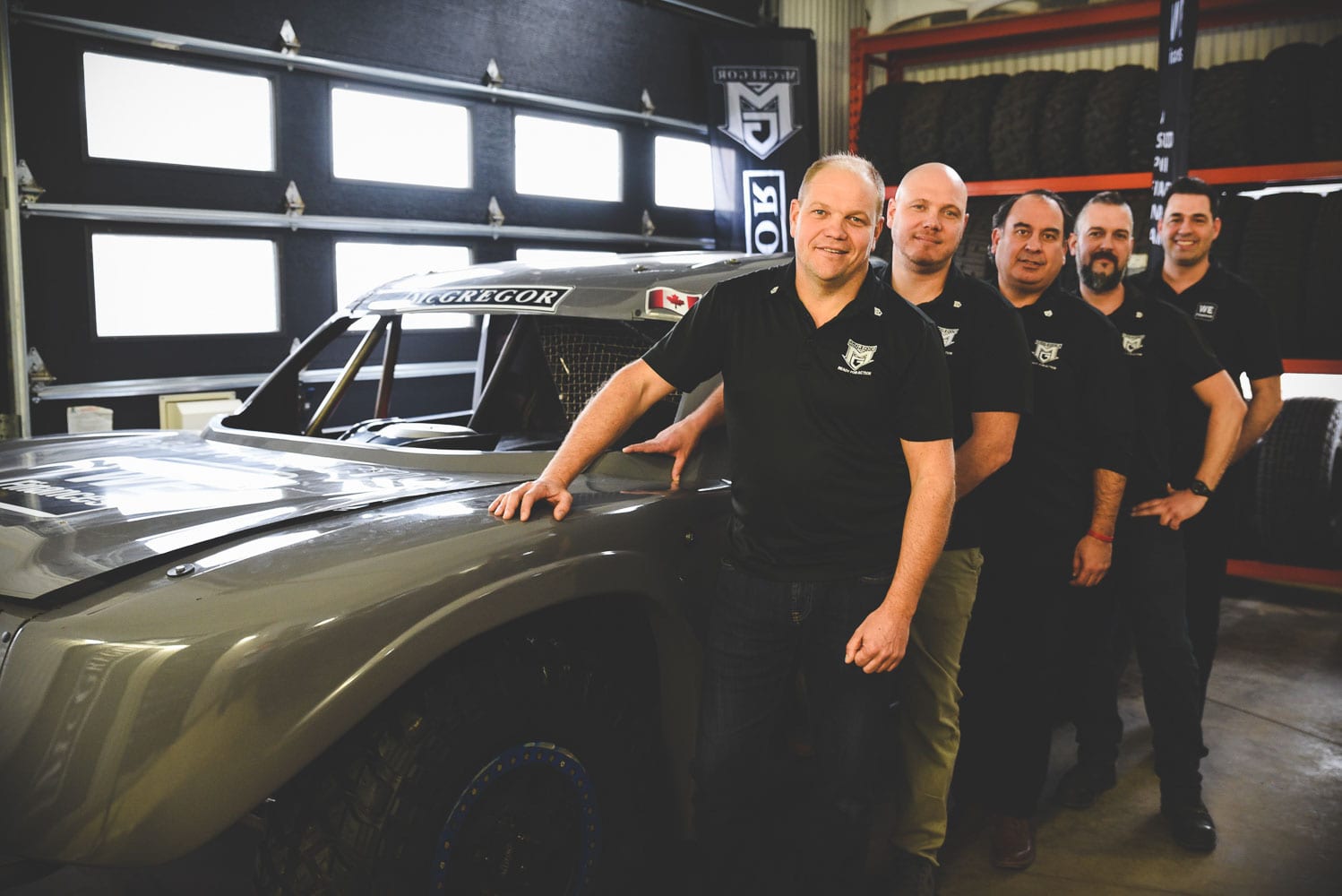 Sainte-Marie-Madeleine, February 27th 2019 – In Québec, the small world of off road vehicle racing welcomes a brand new player with the birth of the McGREGOR Offroad Series, presented by WE-Finances. With the Quad and SXS series, it is with great pride that the brothers Serge and Guillaume Michaud, co-owners of McGREGOR Performance, announce the creation of the MXPRO-2 pickup racing series. The McGREGOR Offroad Series will satisfy fans at the four corners of the province as it will be presented in 7 cities across Quebec starting next May.

Having necessitated major investments from its founders, Serge and Guillaume Michaud, the McGREGOR Offroad Series promises to offer a spectacular show to everyone in attendance at any of the events on the program. The racing circuits proposed by the promotors for the cities that will be visited by the event are unique in Quebec. They
present courses composed of tracks that are large and fast with tight turns and long far reaching jumps. The cities and municipalities where the events will be held between Mai 17th 2019 and September 1rst 2019 are the following : Guadeloupe, Saint-Ferdinand, Rivière Rouge, Sainte-Thècle and Thetford Mines. Negotiations are currently underway with two other cities and the locations will be revealed shortly. « Our series will immediately be adopted by thrill seeking enthusiasts because every aspect has been carefully crafted to bring adrenaline levels to a maximum. Whether it be the sounds, the speed, the sharp turns, the breathtaking jumps on dirt or hybrid tracks, nothing was left to chance to ensure spectacular races. The family aspect will also be omnipresent at our events », emphasizes Mr. Serge Michaud, professional driver and co- owner of McGREGOR Performance.

DRIVERS WANTED
Experienced off road racing drivers, Serge and Guillaume Michaud will participate in the various portions of the McGREGOR Offroad Series. Passionate about automotive racing since childhood, they have 8 competition vehicles in their stable. The Michaud brothers are currently looking for professional sponsored drivers to drive them so that all these vehicles can be in action at the events. Whether it is to drive a Toyota, Dodge, Nissan, Ford or GM model, McGREGOR Performance is ready and able to prepare a customised truck for them. « We have also reached out to a few well known drivers from the National
Association for Stock Car Auto Racing (NASCAR). We invite sponsored drivers to
contact us », explains Guillaume Michaud, professional driver and co-owner of
McGREGOR Performance.

CATEGORIES OFFERED
Amateurs and professionals alike will have access to the different categories depending on the type of race offered. The applicable rules for each category as well as the procedures for registration will be available on the new series website in the upcoming weeks.

WE-FINANCES IS PLEASED TO BE A PARTNER WITH THIS NEW SERIES
WE-Finances is joining the first edition of the new racing series as official partner. The business provides financing for vehicles of all sizes, from all terrain to recreational vehicles, including snowmobiles and cars.

Furthermore, as official partner, WE-Finances offers drivers the possibility of financing the lease or purchase of a racing vehicle. « We are proud to participate in the first edition of this new racing series with the Michaud brothers. They are dedicated guys who currently excel on the circuit in the United States and Ontario. We firmly believe that racing fans highest expectations will be met by these events » says Christian Fournier, spokesperson for WE-Finances.

PARTENAIRES WANTED
The McGREGOR Offroad Series organisation is currently looking for partners who would like to associate themselves to one of, to many or to all of the events surrounding the races of this new series. You can simply contact Louis Scarpino (514 238-4539 or louis@visionfpl.com) or Serge Michaud (514-293-2961 or serge@mgreg.org).

More information is available at www.mcgregoroffroad.com. Please take note that more content will be added to the website in the upcoming weeks.

ABOUT MCGREGOR PERFORMANCE (www.mcgreg.org)
Automotive sport automobile has always been a passion for the owners of McGREGOR Performance: Serge Michaud, Guillaume Michaud and Eric Gosselin. This passion has been a determining factor to their implantation in the Quebec automotive industry. Their wide network of contacts, associated with their expertise, permitted them to launch McGREGOR Performance, a company that specialises in the sale, the development and
manufacturing of off-road parts and vehicles. Ever attentive in its effort to offer the best driving experience and to exceed the expectations of motor sports enthusiasts, McGREGOR Performance has integrated many high performance products to the world of off road racing. These products are addressed to a diversified clientele while meeting their common desire to feel big thrills aboard powerful and robust machines.