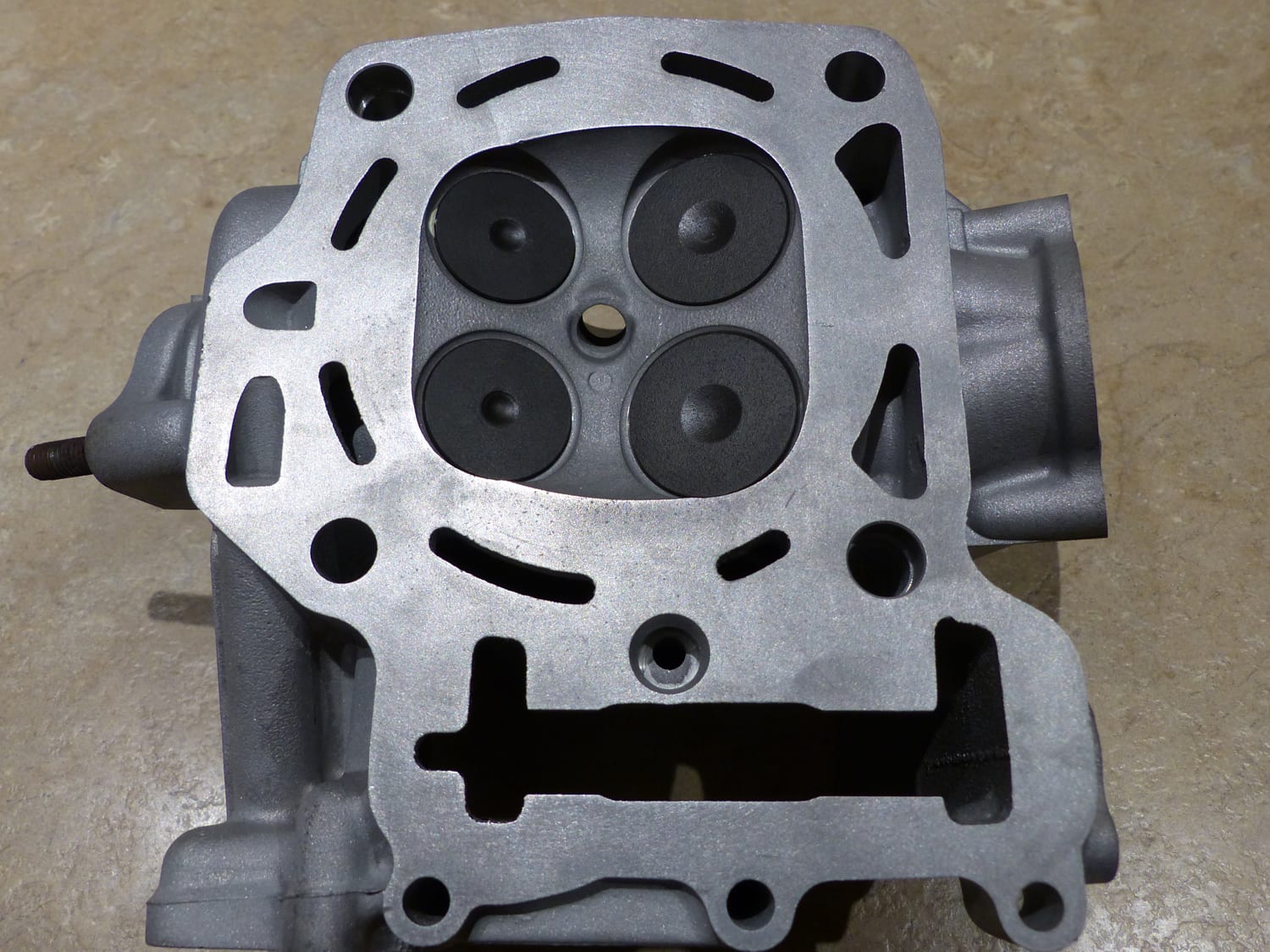 Sports ATVs like the Banshee, 250R, 400EX, QuadRacers and many other racing models equipped with highly modified engines are gradually disappearing from the landscape. The reason is very simple – the manufacturers have practically all abandoned the pure sport ATV segment. Obviously, performance buffs have turned to 4×4 ATVs. Today, a variety of performance parts are available for many of the 4×4 ATV engines.

In the world of modified engines, the link between reliability and performance is quite inversely proportional. The increase in performance of an engine exerts mechanical and thermal stresses greater than those of original specifications. The investment to obtain additional HP can become short-lived as the engine wears faster. The level of modification of your engine will have to be determined according to what you want to do. Some heavily modified engines have a very short life and will last at most just a few races, or seasons of hard trail riding. On the other hand, lightly modified engines will remain very close to the original in terms of reliability.

Despite the reliability facts, it can be exciting to modify an engine to get more performance, and for that reason, you may have decided to go further. To begin, check if there are engine performance parts available for your ATV, both on the mechanical side and the engine management, such as the engine control module. If no performance parts are available, the idea of modifying your ATV engine can become a nightmare and the possibilities are rather limited. This is still possible, but you will have to do everything by yourself and invest a lot of time and money, followed by trial and error and that may lead you to terrible frustrations.

Why manufacturers don’t optimize their vehicles

The ATV manufacturers have to meet environmental requirements such as noise emissions and polluting emissions norms. It is also a matter of reliability and smooth operation of their ATV under all conditions. That’s why most ATV manufacturers don’t optimize their vehicles.

What can you do with your engine?

A less restrictive air intake, a performance air filter with a modified air filter box is generally effective. Watch out for the air turbulences which must be controlled otherwise there will be a contrary effect, especially when the ATV is running at high speed. If the intake restriction is reduced, it must also be reduced on the exhaust side of the engine; both go together. A performance exhaust is then a must. In addition to the muffler, an exhaust pipe matched with the performance muffler will give better results.

When available, a performance camshaft is also very beneficial. It is sometimes available in more or less aggressive versions. The levels of performance are identified by stage 1, 2 or 3. Stage 1 is near the original performance and stage 3 is for the best performer. Sometimes, the choice of the camshaft requires the replacement of the engine head valves return springs due to the aggressiveness of the cams shape. These camshafts offer a wider opening of the engine valves thus improve the intake and the exhaust. However, one disadvantage is that the engine will have an irregular operation, especially at idle. Another modification that optimizes the flow of air/fuel mixture is that of the engine head. This is called cylinder head porting. The engine head is machined with a CNC machine and it enlarges and smooths the interior of the intake manifold. This is a very delicate operation and must be done by real specialists.

The piston in the cylinder produces the engine torque. The combustion of the air/fuel mixture creates a pressure on the surface of the piston which pushes it downwards. The connecting rod attached to the piston transmits this torque to the crankshaft. The pressure resulting from the combustion of the air/fuel mixture is proportional to the surface of the piston. We easily understand that a larger engine displacement will have higher torque. If the piston is replaced by a larger one, the surface of the piston’s top is increased. At the same time, the volumetric ratio of this engine will be modified. The volumetric ratio is the volume space in the cylinder with the piston at its lowest position, relative to that of the combustion chamber once the mixture is compressed with the piston at its highest position. These ratios are approximately between 9:1 to 11:1 depending on the manufacturer. In Otto Cycle, which is the theory of an idealized atmospheric engine, a higher compression ratio will provide more power. This volumetric ratio can be increased by replacing the piston with an increased dome head, reducing the volume of the combustion chamber, lengthening the connecting rod, stroking the crank, reducing the height of the cylinder, or simply using a thinner head gasket. Unfortunately, there are constraints to increase the compression ratio. The biggest problem is the high temperature caused by the compression of the air/fuel mixture. The high temperature obtained by the compression of the mixture can simply self-ignite it. This self-ignition reaction is called detonation, knocking or pinging. It is very destructive for an engine to operate under these conditions. The maximum possible compression ratio of an engine will usually be the highest without detonation. There are solutions to reduce this phenomenon: use gasoline with a higher octane rating, delay the ignition advance, modify the combustion chamber in order to eliminate hot spots, use a colder spark plug, have a colder intake air or reduce the volumetric ratio of your engine.

In the engine management system, we find the ignition and the fuel management. In the past, gasoline was allowed to enter the engine via a carburetor. For some years now, the injection has handled the fuel with the help of the ECM, Engine Control Module. This module controls the opening of the fuel injector (or injectors) from an algorithm. The ECM uses a variety of continuous measurements for its algorithm such as engine rotation speed RPM, the vacuum inside the engine intake manifold, engine temperature, intake air temperature, throttle position as well as the atmospheric pressure.

The ignition is also managed by this module. It determines the required ignition timing and ignition advance.

The algorithm programmed inside the Engine Control Module is called engine mapping. Some manufacturers have an engine map that can be modified by specialized companies. In other cases, it is best to purchase a performance ECM with pre-installed maps. In the best of all worlds, it is to get a fully programmable module for both injection and ignition. With this, there is the possibility of optimizing your investment in modifications. This will, however, require adapted equipment and some knowledge.

The level of modifications can be very variable and even be done in a progressive way, which is a financial advantage.

An example of a simple but effective improvement

An engine that breathes more air allows to put more gasoline in and results in more performance. Therefore, a simple modification of the air filter and its air intake box paired with a performance exhaust with less restriction will visibly improve engine performance. Do not forget to calibrate the fuel supply accordingly, otherwise, your engine will run lean in fuel, which can be very damaging. The air/fuel mixture must be adjusted at each modification, which will allow better combustion and, consequently, increased performance. This simple modification reduces the restriction on engine intake and exhaust, allowing better performance. The only negative side effect is that the ATV will run louder. The committed budget will be reasonable without affecting the life of the engine and the modification is very simple from the mechanical point of view.

Before you start modifying

Before you start making changes, how will you confirm your power gains ? How many times have I noticed modified ATVs that express a roar worthy of a V8 monster that, in the end, leads with less power than the original. This roar can sometimes give us a false impression. I like the idea of having a reliable measurement before and after the change. You can always find a place where you will perform tests with time and speed measurements. The accuracy will be questionable, but preferable to an I think that… For real specification maniacs, there is the dynamometer. There are several types of dynamometers, but regardless of the type, it is a precise way of measuring the real horsepower. In this way, it is possible to measure the true difference in power gain.

My own modification plan

Personally, I will test a set of big bore cylinders and piston kit from DG Usimécanique inc. located in East Broughton in the Chaudière-Appalaches region in Quebec. It is Mr. Doyon from Usimécanique who made me aware of the existence of this set. In fact, this Big Bore Kit transforms a Polaris 570 engine, which is actually a 567cc, into a 625cc engine. There is 5mm of added bore, which is a lot ! I really have to admit that Mr. Doyon strongly piqued my curiosity with this project. I will soon proceed with its installation and will try to provide reliable data on the result by measurement on a dynamometer.

Whether you are skilled or not in mechanics, there is always the possibility of improving the performance of your ride. You can have it done in a trusted workshop of your choice. It is sometimes less expensive in manpower than it may seem. Ask the professionals.

There are costs to expect in order to make an effective and reliable engine modification of great quality. Improvised changes often have uneven and sometimes negative results on the performance improvement. Use the experience of good professionals to guide you.