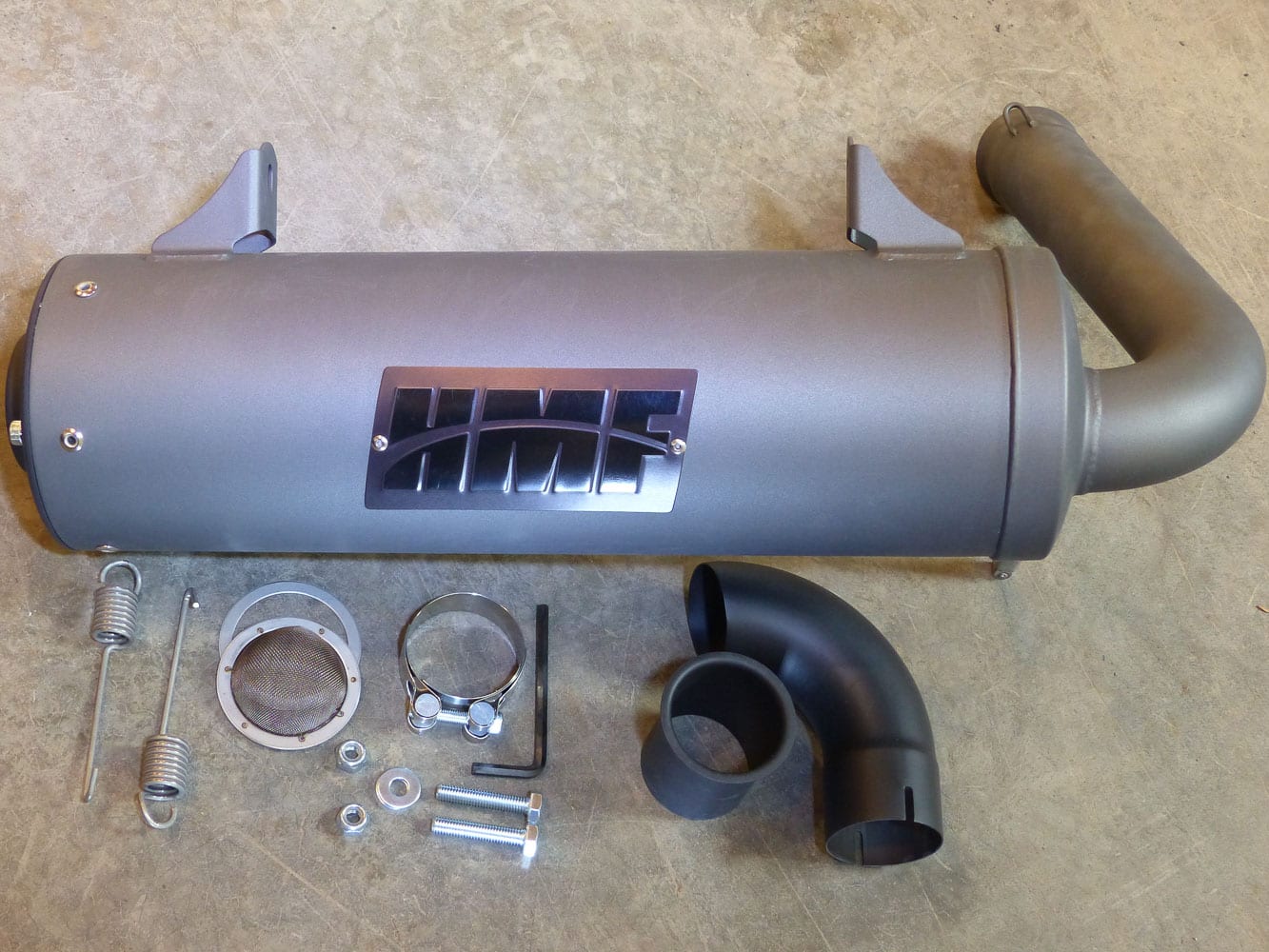 Whether it’s worn out, or you’re looking for a better look, a more personalized engine sound or for improved performance – no matter the reason for replacing the exhaust system on your ATV, it has to be distinctive. It’s a big choice to make.

Your ATV’s exhaust system and more particularly the muffler has several very important functions. First, its effectiveness is controlled by environmental norms and standards. These standards mainly control the sound level and the risk of fire of the exhaust system. As far as sound control is concerned, we all know what we are talking about. It can’t be too loud unless you’re on a closed course. As for the fire risks, the silencers must have a spark arrester, which limits the risk of starting a fire in the forest. After the manufacturers have adapted their exhaust system to these requirements, the engine is now left with an added restriction on the flow of exhaust gases. The calibration of the mapping of the air/fuel mixture is then performed accordingly. So, if you replace a part of the exhaust system that modifies this restriction, a new calibration of the engine mapping is advisable. This will help to maximize the engine performance, but it will also prevent significant engine damage. Keep in mind that running an engine with a stoichiometric imbalance (improper combustion) may end up with a self-ignition effect and will most likely lead your engine to a tragic end.

We had a chance to install and test an HMF model Titan QS silencer, which has a strong ceramic finish. It is distributed by Kimpex. HMF offers different finishes and models to meet everyone’s needs. We chose the Titan QS mainly because of its appearance and its sound that is said, according to the manufacturer, to be not far from the original sound. When proceeding with the order of our new exhaust system, HMF warns us of the need to adjust the engine’s fuel supply. Fortunately, HMF has a pre-calibrated injection optimizer module for this adjustment. So I included this optimizer with the muffler order.

The installation of these slip-on silencers is very simple. No special tools are needed to perform this operation; your basic tools will do the job. First, you must remove the original silencer. In this case, we proceed on a Polaris Sportsman. Simply remove the retaining springs with a special tool or with a piece of wire through the spring. Be careful, the tension of the springs is quite high. Remove the muffler retaining nuts and set aside.

Remove the muffler bracket from the ATV chassis. Inspect the exhaust gasket and replace if it looks worn as in the picture. This seal is not included in the HMF muffler kit.

The silencer is shipped assembled but without its accessories. You must remove the end of the muffler and install, if desired, the spark arrestor and angled pipe end. The hex key used for this is supplied with the accessories.

It is now time to reassemble. Simply position the Titan QS Silencer in place and secure it to the chassis with 2 bolts and nuts. Install the two springs provided and make sure the installation is tight and secure.

You have certainly noticed the control buttons on the optimizer. If your ATV has been modified, it may be necessary to change some optimizer settings. It offers the possibility of modifying the injection settings on three ranges: low, medium and high engine speed. Each of these ranges is individually adjustable on 8 levels. Before experimenting with these adjustments, remember that you play with the life of your engine. If you do not want to end up with an expensive engine’s autopsy, reaching HMF’s technical help line via their website can be a good idea.
Let’s go to the test

I previously measured the sound level emitted by the original exhaust. With the engine idling, the measurement was 83 decibels. At 4,000 RPM, the measurement was 90 decibels. Then I start the ATV with its new exhaust. My first impression is very good: I hear a deep roar that sounded like more performance is delivered than the original one, but without being annoying to the ears. Then I take the sound measurements of the Titan QS HMF. At idle, the result is 86 decibels and at 4,000 RPM, I get 91 decibels. My numbers are very close to those promised by HMF. So this muffler offers a richer sound without adding too much to the OEM decibels. If you are looking for a sound of greater power, HMF manufactures exhaust systems for all tastes.

The construction of HMF products is of very good quality and their finish is beyond reproach. They perfectly adapt to the ATV, which is not always the case with other manufacturers of silencers. Regarding the engine power gain, HMF says it will add an additional 1 to 2 HP for this mod. Although I cannot confirm greater power even after a road test, I can tell the behavior of the ATV is certainly very different after this mod.

A dynamometer test will confirm this in a future article.