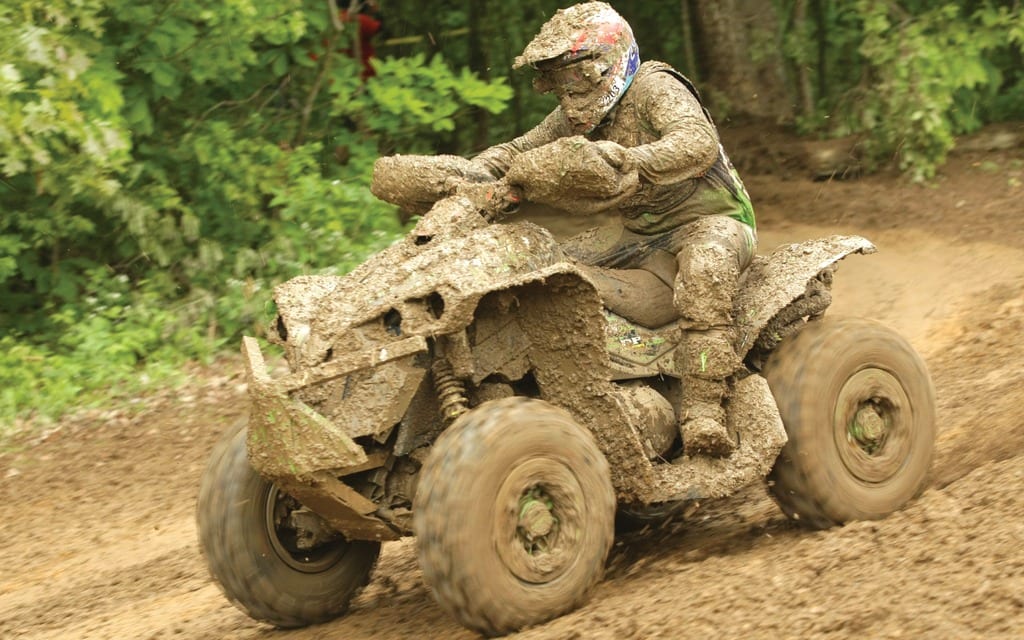 “The Limestone 100 GNCC was one of the most challenging, muddy GNCC races in quite some time. Anytime you can end a muddy two-hour GNCC race with a victory, three in the top five and still maintain the 4×4 Pro class points lead, you have to be pleased,” said Jeff Leclerc, Racing Project Leader, Can-Am. “Jordan Phillips earned another big win this year and continues to make huge strides in his chase for the championship.”

Round six of the GNCC series was a muddy mess and one that challenged both man and machine, as only 51 of 258 total riders in the 10 a.m. session were able to complete all five laps. The filthy conditions were no match for Phillips and his Can-Am Renegade 1000R ATV. The Renegade ATV’s awesome power propelled him to the holeshot, while its dependable performance helped Phillips stay in the top two the entire race in spite of dozens of deep mud holes, numerous lapped riders and fierce competitors.

“Wow, what a race! I pulled the holeshot and battled for the overall all day long. My Can-Am Renegade ATV was amazing today is dismal conditions. I’m thrilled to have pulled off the win,” said Phillips. “Thanks friends, family and all of my sponsors!”

Philips and Can-Am X-Team teammates Kevin Cunningham and Robert Smith battled for the win. In the end, Philips edged Smith by 14 seconds for the victory. Smith led after four laps, but lost some time on the final lap and had to settle for a very respectable second-place finish, his best of 2016. Cunningham was the race leader after two laps, but ended up fighting through traffic and the sloppy conditions to notch a solid top-five finish. His fifth top-five run of the season maintained his current No. 1 position in the class points race.

Phillips is the first 4×4 Pro class racer and Can-Am X-Team member to record more than one victory in the first six rounds of the 13-round GNCC ATV schedule. Phillips, who also won round three in North Carolina, currently sits in fourth place in the 4×4 Pro class standings with his Can-Am Renegade 1000R ATV.