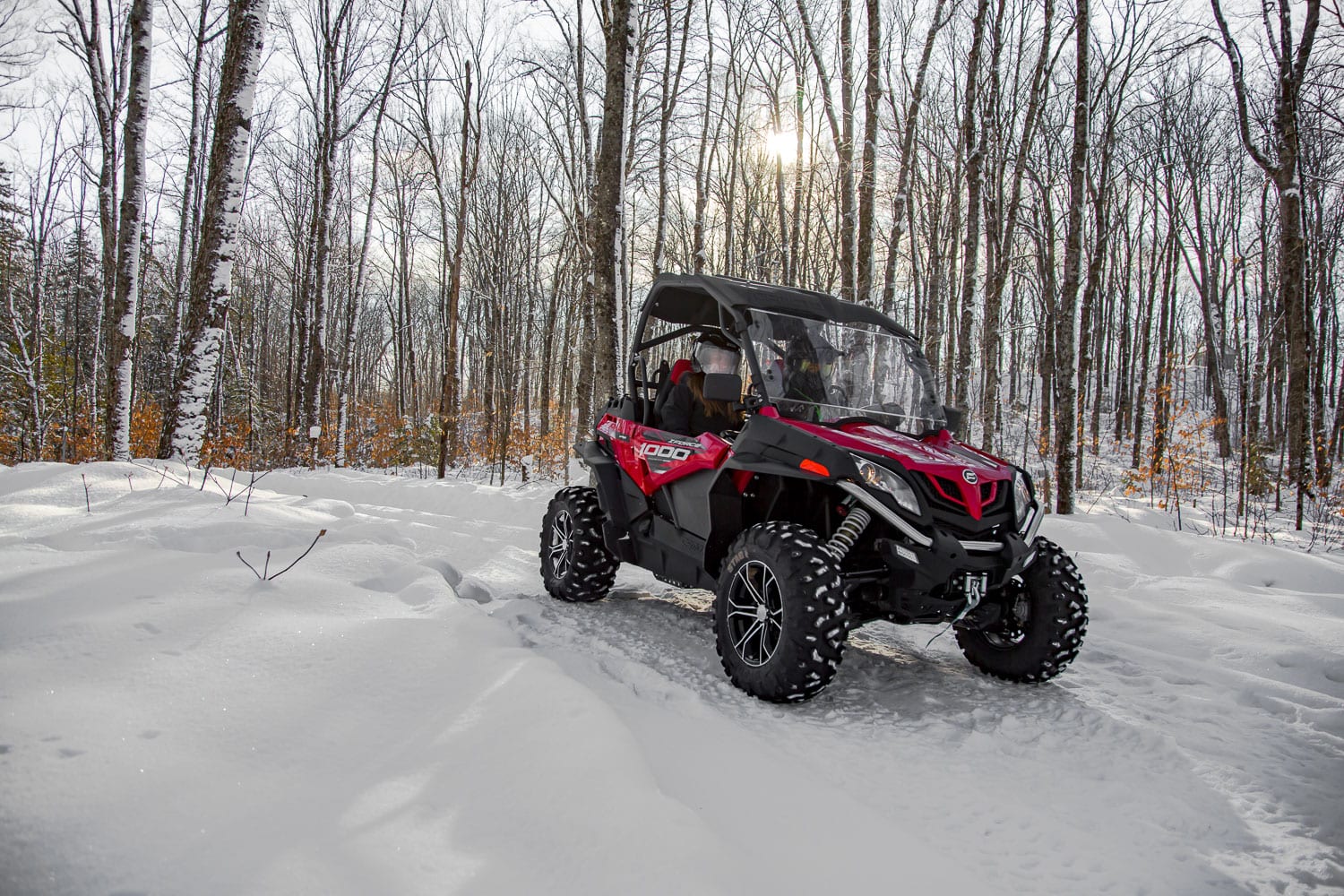 It is well known, CFMOTO is continuously surprising us and even if they make some people furious, others believe they raise the frenzy and the passion. Let’s be honest, their presence shakes the foundations of the off-road industry and they leave no one indifferent. Everyone has his own point of view on this ever-growing manufacturer and this is what makes CFMOTO one manufacturer that generates the most attention.

Year after year, CFMOTO offers new products and constant improvement of their existing line-up. As a result, they have to follow the epidemic wave of the ever-increasing number of horsepower in the UTV segment. In this regard, North American manufacturers of off-road vehicles are at the top of the list. Nevertheless, the category of sports UTVs is a real gold mine for all manufacturers and each one carries out various strategies to attract consumers to their showrooms.

CFMOTO made us wait for almost 2 years before the introduction of a 1000cc UTV. This wait has finally ended in 2018 with the arrival of the first batch of ZFORCE 1000cc. This spring bloom surprised many simply because we were several to have given up the idea. Our hopes were quickly revived and this introduction, unfortunately with very little units distributed to all the dealers, rapidly created a shortage effect.

In return, CFMOTO Canada quickly fixed the situation after seeing the enthusiasm for their flagship model. So, here we are in the second year of this long awaited model at CFMOTO. The ZFORCE 1000 attributes are undoubtedly sporty and that is what the majority of the UTV enthusiasts seek: a vehicle that will increase their heartbeat rate in record time.

CFMOTO understands that consumers value vehicles that meet their expectations and preferences. So they strive to design units with different features, ranging from a model with fewer bells and whistles to the fully equipped model that sounds like a racing machine. These are also appropriately priced and balanced to match everyone’s budget.

For some people, apart from the stickers making the distinction between the different CFMOTO engines, the overall appearance looks just the same. Indeed, in good part the last-born ZFORCE uses the chassis and the components that were already exploited for some years. This combination has already proven itself, so why not take advantage of it? This platform is a good base to receive a more vigorous engine. The rigid chassis and its wide cabin allow a lot of comfort for users of a regular size. For drivers with unusual proportions, adjustable seats are waiting to serve them. The legroom is also very decent for this type of vehicle apart from special attention to the right knee which will, unfortunately, have the annoying habit of knocking the lower corner of the dashboard. The seats have received their share of improvement and the material that makes them is easier to clean.

The 4-point safety belts are almost indispensable for this type of vehicle and they ensure occupant safety. CFMOTO is one of the very few to equip its vehicles with these belts as standard equipment; they require a time of familiarization during their first use, but they offer unparalleled safety. The passenger also benefits from a grab bar when the occasion arises.

One of the novelties included in this new UTV, the half-doors are aesthetically very successful and they greatly complement the bodywork. However, they require appropriate adjustments when preparing the vehicle for easy operation without excessive effort. Their convex outward shapes allow two adults to fit comfortably into the cockpit and access to the pull handle is very easy. They are a nice improvement if we compare them to the netted doors CFMOTO had accustomed us to in the past.

The steering wheel adjusts by the action of a lever and easily adapts to the desired position. The centrally located dashboard provides all the necessary information by the mean of a digital display: odometer, tachometer, voltage, fuel level, temperature, oil pressure, gear ratios and time. Cup holders and a glove compartment complete this well-equipped interior.

The bodywork is made of automotive quality painted panels offered in several colors and original graphics make up its eye-catching exterior. The standard front and rear bumpers ensure occupant safety and the large wheel fenders are welcome by preventing unwanted debris to splash the occupants when the vehicle is used in more hostile areas.

One point of interest is also at the tire level. ZFORCE 500 and 800 cc models feature 26-inch CST Abuzz tires. In the case of the ZFORCE 1000, it is equipped with 27-inch CST Stag radial tires that provide increased bite and versatility for all types of terrain, regardless of the season. The CST tires used for several years by CFMOTO have attracted many praises and the choice of tires used for the ZFORCE 1000 will not stop this complacent wave. We also believe that aesthetically speaking, CFMOTO has the nicest aluminum wheels on the market.

A major point that will make the difference between a vehicle that you appreciate during a ride and another that will cause you only regrets is the suspension. CFMOTO offers compression and rebound adjustable gas shocks. They are already proven and easy to adjust for the neophytes in this category. They adjust by simply turning the thumbwheels to find the perfect adjustment according to your preferences.

While the competition strives to make every effort to win the HP race with turbocharged engines, CFMOTO has instead opted for a naturally-aspirated V-twin engine of 962cc delivering 80-horsepower. We are aware that this number of horses may seem conservative, but it is otherwise in reality. For the sake of long-term reliability, the power has been somewhat mitigated, but CFMOTO can boast to offer one of the best weight to power ratios on the market. From the first acceleration aboard this vehicle, we see a clear improvement compared to the ZFORCE 800 of 62 horses. The sound of this mill is very pleasant for the hearing and it is not annoying even at high speed.

One of the aspects that contribute to instant acceleration is the addition of a CVTech dry clutch comparable to that used on the ZFORCE 500. This dry clutch offers less restriction and the engine oil is free from contamination left by residues the wet clutch could create. However, periodic maintenance and frequent cleaning are required to ensure proper operation and full potential. We believe that this choice of clutch is the right decision for the ZFORCE 1000 and it benefits at every turn exit.

In the case of all vehicles produced by CFMOTO, they are equipped with a package of standard equipment and accessories and the ZFORCE 1000 is no exception: a 3000-lb winch with wire remote provides hassle-free exit during a stall, LED headlights and rear lights for increased visibility, and finally CFMOTO is the only manufacturer to equip its vehicles with standard turn signals.

And even if everything that has been listed above does not convince you, let us share with you the longest limited warranty on the market. CFMOTO offers a full warranty for the first year and a 48 months / 5000 km powertrain warranty. No other manufacturer offers so much!

Is this vehicle a purchase to consider ?

We can not deny that CFMOTO has attracted some criticism in the past regarding the preparation, finish, and quality of assembly of their vehicles. However, this time is over and they meet the highest standards in the industry. Some also claim that Chinese products do not reach the level of Japanese or American production. Let us mention that CFMOTO vehicles have a Canadian flavor with the CVTech clutch additions. Finally, if they were unsure about the quality of their product, they would not offer a guarantee unmatched in the industry.

The sales increase and the progress of the brand are there to prove CFMOTO’s firm intention to establish itself in the off-road vehicles industry. They know a steady growth of more than 70% in monthly sales and they are considered Canada’s fastest growing motorsports brand. One thing is sure; these vehicles are disturbing in today’s off-road neighborhood.

CFMOTO’s off-road vehicles leave no one indifferent. They attract a lot of interest and curiosity. The dealer network of this brand continues to grow and they intend to take a big share of the off-road vehicle market. Sincerely, they have no trouble doing that, because we are witnessing the influence of this brand nationally and globally. It’s up to you, if you have not already done so, to make a stop at one of CFMOTO’s dealers to find out what they have so much to offer.