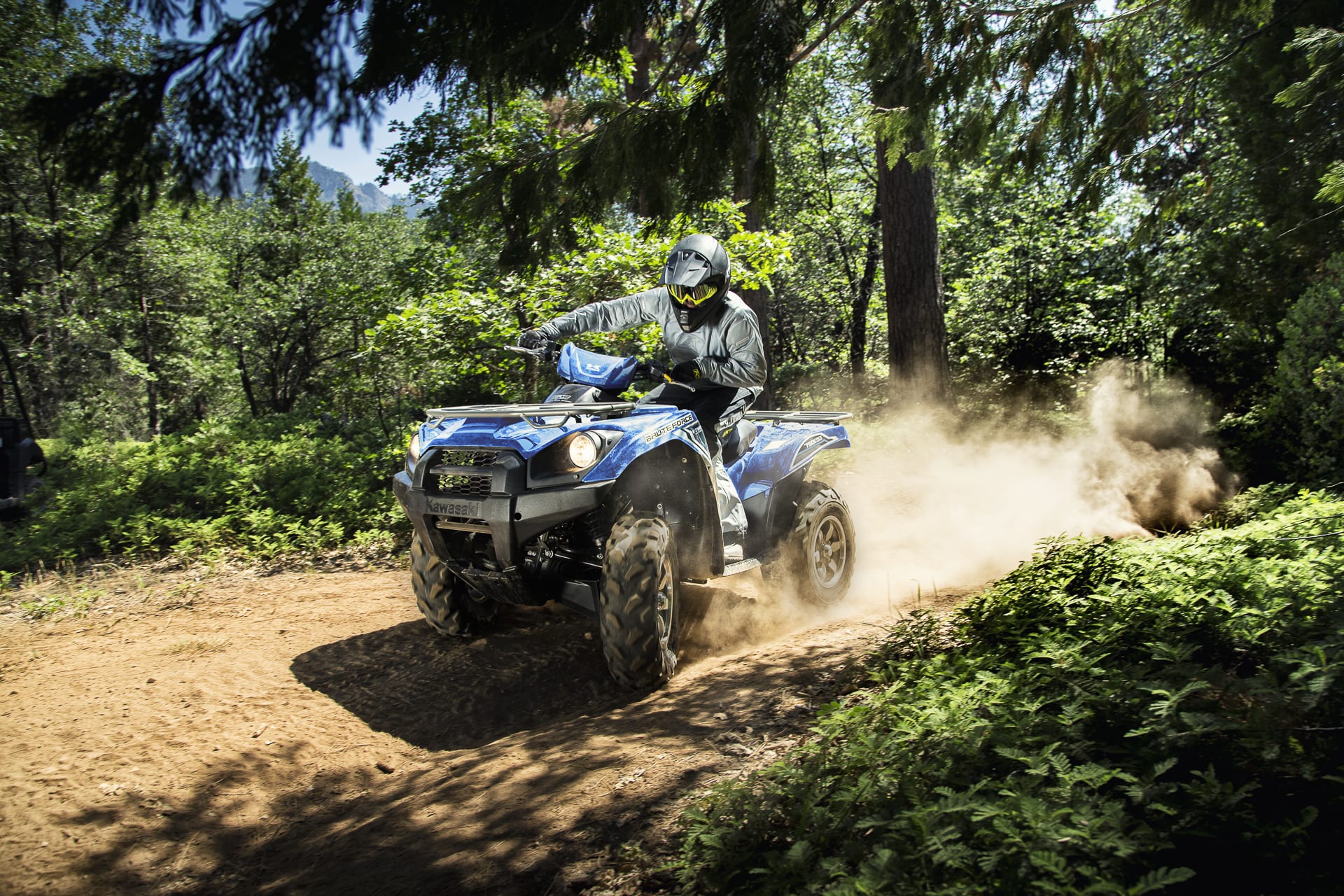 Designed to get the job done while also having fun recreational capabilities, the 2018 Kawasaki Brute Force ATV lineup meets the needs of farmers, ranchers and those with a love of the great outdoors. Equipped with either a 749cc V-twin or a 271cc single-cylinder engine, depending on the model, the Brute Force model range is designed to suit a variety of needs and budgets. The Brute Force 750 4x4i models are available with Electric Power Steering (750 4x4i EPS and EPS Camo models) as well as four-wheel drive to help ensure you can conquer the terrain. The price- friendly Brute Force 300 is a great tool to get the job done. Built around a sturdy frame, with proven Kawasaki performance, the Kawasaki Brute Force ATV family is Kawasaki STRONG.

An ATV ready for anything and powered by a fuel injected 749cc V-twin engine, the Brute Force 750 4x4i EPS and EPS Camo models both feature two and four-wheel drive modes, which the rider can select at the touch of a button on the handlebars. They also have the benefit of Variable Front Differential Control for the limited-slip front differential, to allow the rider to choose the amount of torque delivered to the front wheels for improved traction.

Smooth power delivery is achieved using the Kawasaki Automatic Power-Drive System (KAPS) for the Continuously Variable Transmission (CVT), which eliminates shifting and automatically keeps the engine in the most efficient range for any selected vehicle speed, load, or terrain. Both models feature Electric Power Steering (EPS), increasing maneuverability and allowing riders to stay in the saddle longer by reducing fatigue.

Equipped with powerful front disc brakes and double wishbone independent suspension with 6.7 inches of wheel travel, as well as a sealed rear brake system, the Kawasaki Brute Force 750 4x4i EPS and EPS Camo ATVs are well suited for the trail.

The most popular member of the Brute Force® ATV family is the Kawasaki Brute Force 300, which is powered by a capable 271cc single-cylinder, four-stroke engine that is tuned for precise maneuvering by delivering torque at low rpm. It is paired with a Continuously Variable Transmission (CVT) that provides responsive performance, smooth power transfer and useful engine braking.

Equipped with sturdy front and rear racks, the versatile Brute Force 300 ATV is a perfect fit on the ranch or farm as it can carry tools, equipment or feed.

Kawasaki Heavy Industries, Ltd. (KHI) started full-scale production of motorcycles over a half century ago. The first Kawasaki motorcycle engine was designed based on technical know-how garnered from the development and production of aircraft engines, and Kawasaki’s entry into the motorcycle industry was driven by the company’s constant effort to develop new technologies. Numerous new Kawasaki models introduced over the years have helped shape the market, and in the process have created enduring legends based on their unique engineering, power, design and riding pleasure. In the future, Kawasaki’s commitment to maintaining and furthering these strengths will surely give birth to new legends.

Kawasaki’s tagline, “Let the good times roll.®”, is recognized worldwide. The Kawasaki brand is synonymous with powerful, stylish and category-leading vehicles. Information about Kawasaki’s complete line of powersports products and Kawasaki affiliates can be found on the Internet at www.kawasaki.ca.