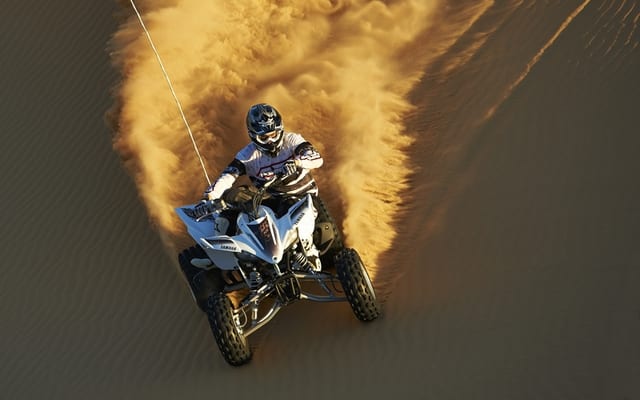 “The YFZ’s price is aimed squarely at the many sport ATV enthusiasts who have been affected by the down economy and may not be in a position to purchase today’s premium-priced 450-class quads,” said Steve Nessl, Yamaha’s ATV and SxS group marketing manager.  “We know these guys are either still riding or at least still want to ride, and we want to give them an affordable option right now.”

“Our core sport customer’s first priority right now is price, but they still demand performance and quality,” Nessl said.  “Yamaha is able to combine all of these customer’s priorities in the new 2012 Yamaha YFZ450.”

The YFZ’s power is complemented by its light weight, compact steel frame with aluminum sub frame and its proven handling characteristics.  The new 2012 Yamaha YFZ450 with its rigid cast aluminum swingarm and aluminum upper A-arms help keep weight down while maintaining performance.

The new KYB front shocks feature 9.1 inches of travel while the rear suspension system uses a piggyback Showa shock with 10.6 inches of travel.  The new wheel was designed with the inner lip rolled in increasing rigidity and allowing a reduction in weight while maintaining strength, and the new Dunlop® tires (21x7R-10 in front and 20x10R-9 in back) were designed specifically for this YFZ.  Twin hydraulic front brake calipers with 127mm discs and a hydraulic dual-piston caliper 173mm rear disc bring the stopping power.

“The 2012 Yamaha YFZ450 is the right sport ATV for the right price at the right time,” Nessl said. “This machine has a powerful, quick-revving engine in a lightweight and nimble chassis.  Yamaha is more involved in the world of sport ATVs than any other manufacturer, and the new YFZ is another way we can support these customers.”

The new 2012 Yamaha YFZ450 will start arriving at Yamaha dealers by the end of September, and it launches into an immediate pool of parts and accessories – more than 90 GYTR® items from Yamaha and countless aftermarket products.

The 2012 Yamaha YFZ450 comes in Black Metallic or all White.  The White models come with the customer’s choice of one of eleven available free custom graphics kits from One Industries.  More information on the YFZ450 is at www.Yamaha-Motor.com.

Yamaha will also continue to offer the highest-performance, race-dominating YFZ450R for 2012, which was previously announced in June.  A new black and yellow special edition has been announced for this fall.

Headquartered in Cypress, Calif., since its incorporation in 1976, Yamaha also has facilities in Wisconsin and Georgia, as well as factory operations in Tennessee and Georgia.