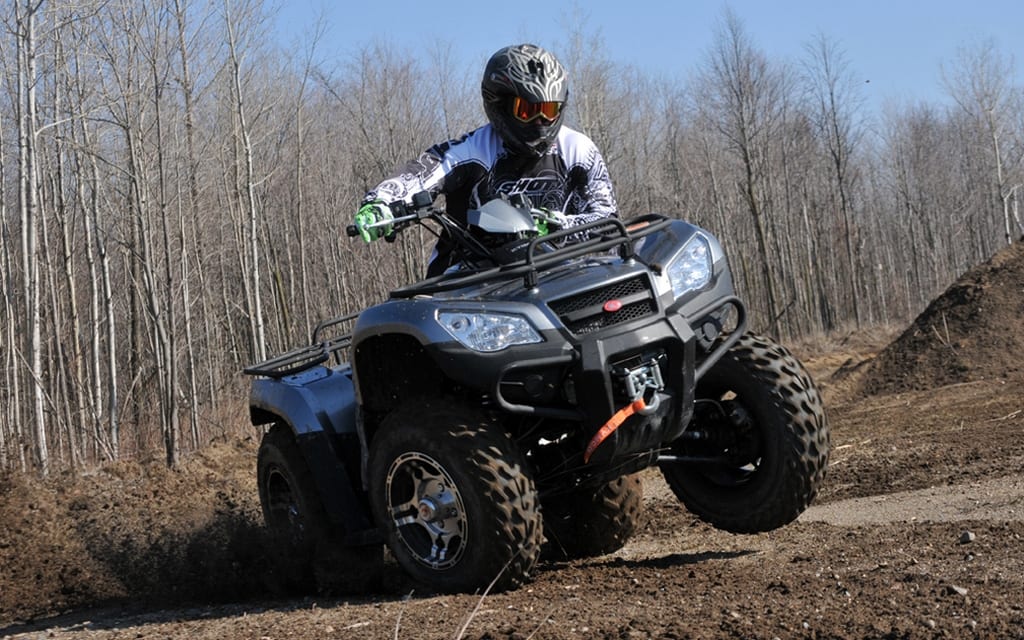 A new mid-size machine joins the ranks at KYMCO. The new 2012 KYMCO MXU 450i, which is basically the same ride as the surprisingly satisfying Maxxer 450i, recently added to their line, with a different dress and the addition of practical racks. The same 443cc displacement single overhead cam engine with fuel injection is at the heart of it. Although it has yet to prove its long term worthiness, its smooth behavior and sufficient amount of torque felt good for most obstacles we enjoyed riding over.
What to expect

We think it is important to mention this quad’s low MSRP of $6,495 Canadian dollars before we move on, as expectations must be adjusted in accordance with it. This mid-size utility might leave some avid trail users with an appetite for more performance, but could also very well be a perfect fit for many, wanting to get into the sport of recreational trail riding, or need a teammate to help out with chores on the farm or ranch, at a reasonable price. For that job interview, we were lucky enough to welcome a classier looking LE version into the bed of our truck, with its exclusive silver color and the addition of much nicerlooking wheels. That new MXU had, at the very least, succeeded in conveying some value and quality. The basic version of this new and a little more affordable MXU, comes in four other color choices: black, green, blue and red, with regular steel wheels painted in black. With time, we have learned that these don’t usually stay pretty for long, as only minor scuffs can ruin their look in a hurry. Don’t be fooled by the presence of a winch on our glorified test unit. This accessory was added to it, mainly to show the quad’s readiness to easily mount one, and maybe even just to better accommodate us media guys, with the means to push this ride to its limits in the mud. We would have liked to see a diff-lock choice on the All-wheel drive button, more than a winch.

The general feel
All-around, this quad’s behaviour is predictable enough. At a logical pace, it rails in surprising comfort. The stroke of the suspension feels extra smooth at the start of the stroke, to only stiffen up almost halfway down the length of it. The extra nice surprise came when we kept on pushing even tighter in a turn to pass the breaking point, when the ride will want to start tipping, as we always do in an attempt to trick ride any ATV onto two side wheels, this quad just wouldn’t have it! Even perplexing someone very familiar with this type of manoeuvre like our only wild in appearance Fitto (we didn’t recruit this 40 some odd year-old veteran ATV rider/airbrush master for nothing) who even stopped and asked me early in his warm-up, if I had tried the two-wheel thing yet? I told him about how the suspension geometry was surprisingly efficient at the breaking point, almost locking up on you and refusing to lift the interior wheels off the ground. Yamaha’s Kodiak 450 feels much the same in that sense, even with  generous weight transfers, on the wrong side! Stubborn as ever, Fitto gave it the aggressiveness needed in achieving the move to two wheels anyway, and of course, ended up rolling off at walking speed, waving back at us as usual. He will never cease to amaze me. Later on, he acknowledged that he never had to put so much effort into climbing the wheels off the ground, to bring a quad to its balance point.

The most surprising, is that such good stability is achieved without the addition of a sway bar.  The IRS suspension does not have any, and it does give a free-to-sway feel to the quad when riding at casual speeds. It makes it quick to drop to one side in an angle while turning, which gives only the impression that it wants to tip. Pushed a little further, it simply grips more. You will need to be mindful of that and not attempt to unhook the back with the throttle, as it can instead aim to throw you off. This sort of behavior meant that this quad was awesome to play with in tight winding, and somewhat on the challenging side deep woods trails. More foot peg presence would have been nice, and the very high brake pedal doesn’t make sense, since it operates the almost too efficient all-wheel hydraulic braking system. If a foot pedal operates the front brakes, it should be placed a centimeter or so below the foot peg, so that the foot rests on the peg and the rider is able to modulate braking by pivoting his foot, instead of resting completely on the pedal. That means that extra pressure will inevitably and exponentially be applied as the weight of the rider is naturally pushed forward. Some people get used to all wheels braking, as they keep their quad in 4WD most of the time. I prefer having the option of controlling the front and rear brakes separately, and find it a much better setup for optimal control under braking. I suggest you use only the hand controls (both of them do the exact same job of applying the brakes at all four wheels, if you are pushing this satisfyingly zippy 450 in performance. Testing your ability to control your ride under hard braking, in a flat and clear area, at slow to moderate speeds, with a trail buddy observing, is a good idea.

Surprise, surprise!
This ATV boasts a fully independent suspension system, with only the spring preload adjustment as an ally in trying to pull more sportiness from out of this chassis. We already knew to be able to display some fun factor potential. The suspension geometry is spot on and truly succeeds at keeping all wheels to the ground. Fitto had not experienced this quad’s good safety traits yet, as I was the only one to have tried the Maxxer 450i, pretty much the same machine in a different dress. Our friends at Classique Moto Sport in Mascouche, Quebec, were as friendly and efficient as ever in prepping this ride, providing us with a perfect suspension setup, for a nice, comfortable feeling, long trail rides. The 5-position spring pre-load adjustments were set halfway all-around. The seat is really nice and plush enough, even for a big boy like me, but the ride is simply not designed for a 6’3’’ guy to feel totally at ease. My left knee was knocking on something pointy. The shape of the plastic around the gear selector includes small square angled protrusions, useless and annoying, maybe only to me and a few, I have to admit, carry around dimensions outside of the norm. In general, this quad isn’t ideal for sporty type rides in wide open spaces, nor for heavy snow or mud conditions. For all-day-long treks in nicely maintained trails with the occasional fun rock section, it’s surprisingly good in many aspects for such a low-priced machine. We see it will serve a farmer for a good number of years. If you do encounter some heavy-duty mud holes, the MXU will need you to keep momentum going throughout the challenge. Watch out for good sized rocks, as there is a good chance that the half shafts will be the first part to come in contact with them, since the lower suspension arms are set further back than these. Plus, it has no diff-lock, so it isn’t the best choice for guys and gals who like to conquer very extreme obstacles. The upside to this for some, could be the heightened simplicity of use and this bike does a really good job of staying easy on the arms in 4WD.

By far the most appealing aspect of this easy to start and smoother running fuel injected Taïwanese machine is its price, but despite the short time spent on this ATV, we found many other details to like about it. The very non-tippy and smooth to ride character of the IRS suspension, is by far, the most impressive quality. The seat is very comfortable. As far as maintenance is concerned, everything is very easy to get to, without grinding knuckles on anything, and the air box is very user-friendly. You don’t even need to remove anything to get to it, since it is ingenuously tucked under the right front fender. The up to the times digital display is also nice, and the transmission mode lever surprisingly smooth and easy to operate. We also like the standard 2’’ hitch receiver and low 275 kg dry weight. With everything taken into consideration, we honestly think this ride can wellserve many people well. It is up to you to judge if it fits your riding style.