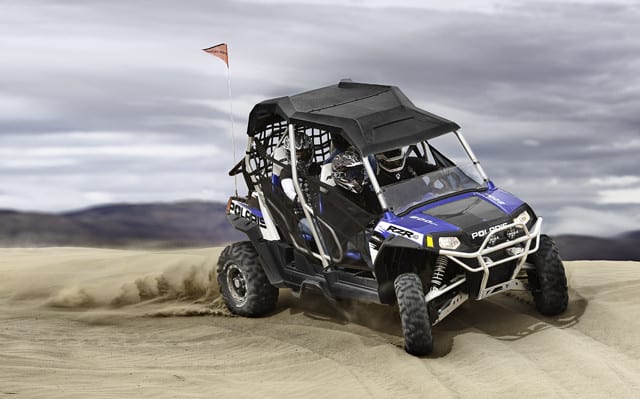 About ten months ago, Polaris announced a relationship with Robby Gordon and today we are proud to introduce the first Robby Gordon edition, the all-new RANGER RZR 4. Before today, Sport Side-by-Side enthusiasts looking to carry multiple passengers had no option; that is no longer the case with the announcement of the industry’s first four-seat Sport Side-by-Side.

“Polaris saw a market for a multi-passengers Sport vehicle at a significantly lower price than an expensive Sand Car or Rail,” said Eric Nault, product manager for RANGER RZR 4. “The RANGER RZR 4 fills that need for a Sport Side-by-Side experience for multiple passengers.”

The RANGER RZR 4 has all the performance and attributes of the RANGER RZR family and the ability to carry four people. With a powerful 800cc High Output Twin EFI engine, the RANGER RZR 4 has a class-leading power-to-weight ratio and strong acceleration. Its 60-inch/152.4cm width coupled with RANGER RZR’s patented design that places the engine behind the back seat for the lowest center of gravity, makes the RANGER RZR 4 more agile than most competitive two-seat Side-by-Sides. At 1,255 lbs/569.3 kg it is also lighter than many two-passenger vehicles.

In creating the first four-passenger Sport Side-by-Side, Polaris paid close attention to ergonomics. For the driver, the RANGER RZR 4 has class-leading tilt steering, offering 10”/25.4 cm of range and a heel pocket for unmatched throttle response and control. The front passenger will enjoy an industry-exclusive adjustable front passenger handrail, while the rear passengers an ample amount of head-room and an exclusive rear passenger handrail. Similar to the front passengers, rear passengers also have a 12-volt plug in and two cup holders. All four bucket seats are interchangeable and offer 4”/10.2 cm of front-to-rear adjustability making it easy to switch drivers. For safety, RANGER RZR 4 has four side protective nets.

The RANGER RZR 4 also features graphics from the Robby Gordon’s TORC truck he raced at Crandon, Wisconsin, as well as, No. 7 NSCS Toyota Camry he raced during the NASCAR Sprint Cup Series Labor Day Classic 500. The Black, Blue and White theme sports the Robby Gordon Off-Road logo on the front side panels with race-inspired graphics, cut-and-sew seats and Maxxis Big Horn tires with Black Bruiser Rims making the vehicle the sharpest-looking Side-by-Side we have ever seen.

“At Robby Gordon Off-Road, we build the highest performance, most elite off-road vehicles in the world. I hope Polaris customers like the new RANGER RZR 4 Robby Gordon Edition as much as we do,” said Robby Gordon.