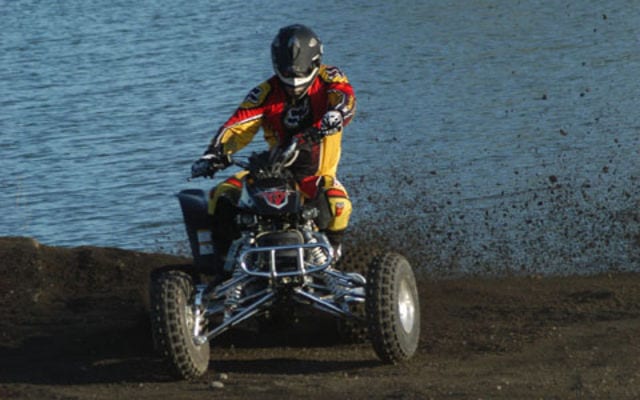 What a nice surprise it was when I first saw this killer looking machine. Then again, it only looks good because it resembles an old Honda 250R 2-stroke, remember those? This fine looking ride though, comes in black or yellow. Taiwan and China imports have been popping up here in Canada mostly in the form of youth ATV’s at first, then utility quads, and now this; a full blown 450cc racing machine. Or is it? Before I got my hands on it, I was hearing optimistic comments about it being super fast. Now that we have tried it, we know it to be just plain fast, not super fast. Still, I do admit it offers the most power in its price range. At around $6,500.00, this thing might appeal to many rookie racers. The ride conforms to all of  the requirements for competition, only lacking number plates to hit the track. It might not bring you to the podium, but I see it as a great learning tool for anyone serious about competition racing.

The looks are actually so aggressive, chromed up to the max with A-arms, bumper, handlebars and stock nerf bars shining bright, that some lad on his two day old KTM 525 XC stopped me on the trail: “Wow! What is this thing? Is it faster then mine?” looking down at his newly acquired orange marvel of racing technology. Having already tried out the KTM 450 SX, “Yours is quite a bit faster actually” I replied in all honesty. Of course, if this quad would have been mine, I might have played him a little, say that it was, and then hope he wouldn’t ask for a drag race. Truth is, it’s not faster than any of the big OEM’s race oriented 450’s, but it can still hold its own against most of them. It lost many drag races against the Polaris Outlaw 450MXR by a few quad lengths after around 150 meters. The Yamaha Raptor 700 and KTM 450  X both totally eclipsed it. We do need to take in consideration that this 450 rumbling Chinese import is a lot less expensive than all the others in this class. This does transpire in its very basic kind of finish.

While it does offer a certain amount of good technology with practical basic things, such eccentric chain adjuster or a wavy and ventilated disc brake at the rear, some other important aspects seemed to have lacked attention. For example, getting to the air filter and battery is a bit of a challenge compared to any other 450, you can’t just remove the seat, it is stuck with the seat as on my old Three-wheeler. It is only possible with tools: a pair of pliers will be needed to remove two cutter pins holding down the two main shafts fixed on the rear fenders and seat assembly and a screwdriver to remove two big screws on the brackets holding the fenders up. The reverse gear was certainly something nice to find on such a low priced all-out sport quad, but the thumb lever that operates it obviously needs to be made of stronger construction as it snapped off the cable after only a few times using it. I could still use it by pulling on the whole cable, since the tip stayed stuck in the housing.

A few other weaknesses were found such as: a lack of bushings on the A arms which showed a bit of loose at the pivoting points, wiring left exposed to the elements and the entire thumb throttle assembly that would loosen up and rotate on the bars. Ordinary household type screws couldn’t be tightened enough to really clamp it well. The 2009 AMG F450R, which is built by FYM, has some positives to it though. Like some very nice things to offer, the less fortunate ATV racing hopefuls that can’t dish out a whole lot of money for race readiness add-ons. It comes with a lot of race oriented features as stock equipment: aluminum nerf-bars, aluminum bumper, aluminum wheels, man-down kill switch, ball-bearing mounted steering and an aluminum handle bar riser. As odd as it may sound, this shiny beast is powered by a Subaru engine; a liquid cooled 448cc that feels a little bit like those old two-stroke 250’s.

A tad late in throttle response at low rpm’s, it then launches more aggressively at mid-range, fading away a bit soon in the higher rpms. Long travel A-Arm suspension up front and the mono-shock swing-arm at the rear, did a good job at soaking-up smoothly some decent jumps on flat landings. The DNM adjustable high performance shocks with piggyback reservoirs seemed to do just fine, but we would have liked to have more time to experiment with their adjustments. One very obvious different aspect of the suspension compared to other race quads is an extremely steep angle in the arms. In a straight line, it causes no problem at all, and it even permits you to attack the rough stuff with great ease, mainly because of this fact alone. It was great to just gun it right into any series of whoops, but made steering the fun ride immensely difficult with the tires scrubbing at a maximum.

At first, I was almost appalled by this sort of set-up, my arms were aching after a very short period of riding time, but then I strangely got to like it in certain conditions. This factor along with the 50” wide stance of a race machine made it almost impossible to tip over as it seemed to push forward constantly. Therefore, tight wood trails are not where this ride shines most and my arms were quickly dying on me as I was heading for the wider spaces of a fine and very big sand pit I regularly go to. It almost felt like I was on cruise control right in the middle of huge power-slides on the now wide and winding gravel road. The wheels would now find the counter steer point by themselves and then later get back to a straight position almost automatically as I blasted out. This behavioural aspect felt so different and amazingly cool to experiment with on the 2009 AMG F450R, that I actually ended up turning around and going back and forth countless times on that now amazingly fun stretch of trail. The borderline ridiculous caster angle and its few advantages had me thinking that this quad could have really amazing handling if that angle was toned down a bit.

After this very first contact with the 2009 AMG F450R, I have to admit that it exceeded my expectations.