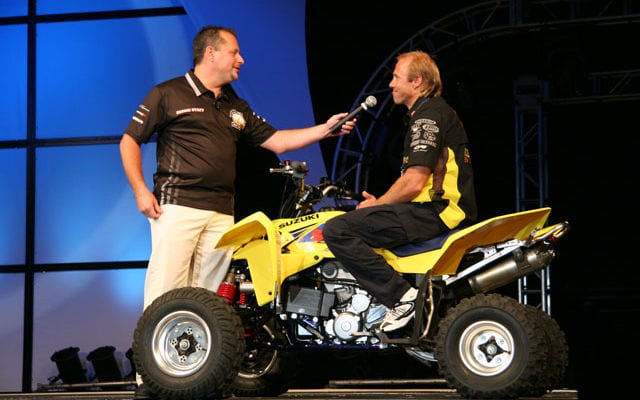 There are many reasons to visit Las Vegas. It has great attractions, great entertainment, and lots of temptation, but rather than catch the Celine Dion show, the only show we wanted to see was the unveiling of the 2008 Suzuki ATV Line-up. It was bound to be a lot more exciting.

A Little engineering Magic
No model in the 2008 Suzuki ATV Line-up received more changes than the race-winning LTR 450.  The engineering crew made quite a few changes on the LTR to further refine the unit, although the chassis is identical to previous model years. One thing that it really needed was softer front shocks, and where previous year shocks were stiff enough for our Chevy truck, this year it got a new shock spec. Internal valving was completely changed as well, along with spring rate, and the rear shock setting was changed to better match the front.  Shock shafts also received a new coating called “Kashima” which offers less friction.

Inside the engine, the piston received a slight change, and the exhaust pipe has a larger diameter, which helps the motor crank out a couple extra horsepower.  Perhaps the biggest change is to the ECU programming however.  Suzuki noticed that in many cases, the wheels simply spin instead of hooking up. To help the tires hookup better, they altered the ECU program slightly. Since it was already measuring the throttle opening and engine RPMs for the fuel injection unit, their solution was to limit the amount of fuel shot into the motor, and in this way, they hoped to limit wheel spin and increase forward drive. A little bit of insurance was to change the rear tires as well, and in that way they were sure to have better hookup with a slightly larger (.4” larger diameter) tire. We’re not really sold on this yet, but we’ll try it very soon and let you know. On thing we are happy to see is a vibration isolation system for the handlebars. At the top of the stem is a set of anti-vibe bushings, which will keep the vibration out of the riders’ hands. For riders preferring something a little different, there is even a special edition LTR 450, which comes in all black bodywork and wheels, with a black frame, and its own graphics. Call it the stealth version.

Reigning over the utility family is the KingQuad 700, which for 2008 becomes the KingQuad 750AXI. Most of the unit is identical to last year, but displacement is bumped up to 750 cc, and although the KingQuad was fully capable of competing with any other utility ATV, a little extra power never hurt our feelings.

Disappearing Act
The trend for the past few years in the ATV business has been to consolidate similar models in a lineup under a common “family” name. Last year Suzuki announced that all new utility-oriented models, and models receiving significant upgrades would fall under the King Quad banner. It made sense to us. The KingQuad name evokes a strong, hard working, top of the line image, and this year one more model joined the family. The Eiger had been a very good ATV in the Suzuki lineup for quite a while, but for 2008, it received a few upgrades, and a name change. It is now the KingQuad 400 FS. Now for the tricky part…

Suzuki is also adding several letter designations to the end of each model name. Hence, the KingQuad 750 is called the 750AXI. We’re not sure what the AX is for, but the “I” part of the name means Independent Rear Suspension. In the case of the KingQuad 400FS, the “F” stands for “Foot Shift”, while the “S” stands for “Swingarm” type suspension (As opposed to “I” for Independent rear suspension). Simple enough?

Invisible UTV
No type of vehicle in the off-road world has enjoyed such enormous growth in the past few years as side-by-side utility vehicles, and they are popping up in every town, ride area, and trail, seemingly like dandelions on a spring lawn. Companies like Arctic Cat, Polaris, and Yamaha have reaped huge sales numbers by leading the way in UTV development, and even golf cart and heavy equipment companies have jumped into the game with rather simple, yet not so nimble vehicles of their own creation. A couple of major players are still on the sidelines however, and we can only wonder what is holding Suzuki and Honda back, and why they have not brought out their own side-by-side vehicle. We did catch up with one of Suzuki’s senior product planners at the show, and when asked when it would happen, his answer was sobering. “I can’t see any side-by-side in the next 18 months from Suzuki” was his answer. “It comes down to a couple things, one being manufacturing capacity, which we can probably do, and it would be built in North America because of logistics, but right now it doesn’t really fit into where we’re heading with all our other ATVs and motorcycles, which is to capture the top of the market in performance. They’re not necessarily performance vehicles.”

When Suzuki does finally get around to launching a side-by-side vehicle, performance should not be a problem, especially if they utilize the 750 cc, fuel-injected engine from the  KingQuad 750. That engine has proven extremely reliable, powerful, and is already mated to a CVT transmission, which is exactly what a side-by-side needs. All that remains is an excellent handling chassis, and the Suzuki engineering team has already proven they can produce one, as they have with their ATVs.  We’ll have to wait and see however, but the dealers are getting impatient as they watch the Arctic Cat, Yamaha, and Polaris dealers push them out the door every day.

Ticket to Ride
There are plenty of great models in the Suzuki lineup, with more to come, and they have promised us a totally redesigned Z-400 later this year as well. (We can only hope they scrap the current chain adjustment system.)  With their continually evolving ATV lineup, whether you want to win races, sling sand at the dunes, or simply get to your favourite fishing hole, Suzuki has an ATV that can do it.  All you need to do is determine where your primary riding is going to be. Remember though, even if it’s a working trip, everybody likes to play ride sometimes as well, and our advice would be, visit your local dealer, and see which model meets your needs best.